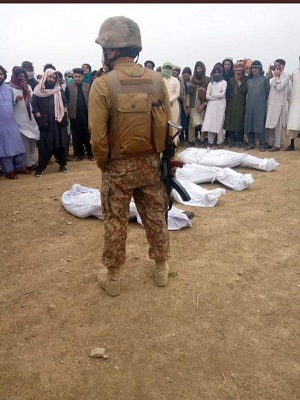 South Waziristan: As per sources, Pakistan army has started killing South Waziristan based Pashtun tribe leaders. Incidents of destroying their mosques and burning Quran have also been reported. The old Pashtun uprising which started from the Mahsud tribe has again flared up. After a recent meeting with Chinese officials in PMA Abbottabad, Pakistan army has started a secret operation Nijat to clear the areas from unhappy Pashtun tribes. To counter this operation, local tribes have established a new guerrilla unit and started ambushing Pak soilders to liberate their land from Pakistani and Chinese foreign aggressors.

As per ground sources, the recent attack on Pakistan security forces in Tehsil Garyum of the North Waziristan, Khyber Pakhtunkhwa (KP) was done by a newly formed local guerilla unit under TTP. The unit supports an independent Waziristan. Although TTP claimed that the attack was done to revenge for the killing of four TTP members in Hangu, KP but the growing local support for TTP is a clear evidence of the demand for an independent Waziristan area where a ground for @PashtunTM_Offi_ appears to emerge. Local ISI was also reported to be active in identifying and killing locals who support TTP.

According to locals, Pakistan has done a genocide of local population. Several killings have been reported by @Pashtunism333. Chinese officials have also been spotted by the locals. Afghanistan is slowly being invaded by Pakistan and ground reporters such as @Pashtun_Afg have exposed the ground events too.