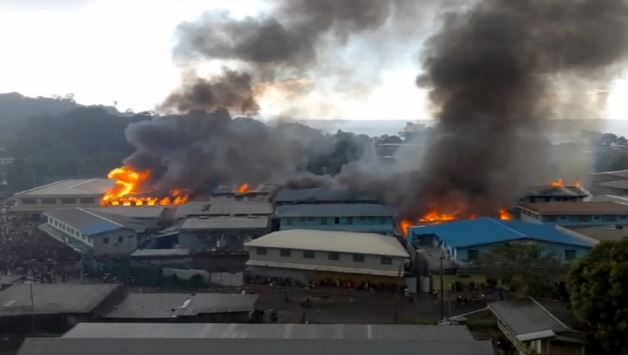 Rioters in the Honiara protest torched buildings in the country’s capital of Honiara, setting the city’s Chinatown ablaze on November 25, 2021. It comes a day after anti-government protests broke out to demand the resignation of Prime Minister Manasseh Sogavare. The unrest is reportedly fueled by discontent over the central government’s perceived neglect of the less-developed island of Malaita, and a decision to switch diplomatic allegiance from Taiwan to Beijing.

It is alleged that Prime Minister Manasseh Sogavare has received $100 million as bribe from China to switch diplomatic allegiance from Taiwan to Beijing. Locals of Honiara and Malaita island have revealed that Solomon islands is militarily important to Chinese and they are trying hard to build a naval base.

In 2019, a Chinese company ‘China Sam Group‘ attempted to lease an entire island in the Solomon Islands which was vetoed by the Pacific archipelago’s government. Chinese were specifically interested in Tulagi, an island of about two square kilometers (0.8 square miles) was a former Japanese naval base with a deep-water harbor. China Sam mentioned developing a refinery on the island , but the US and Australia would have been concerned at its potential for dual use as a Chinese military base.

Locals have been protesting against Chinese workers from a long time. Incidents have been reported where Chinese workers have beaten locals and looted cash from their shops. The area is infested with Chinese gangs who openly threaten locals by stating that their government is in Chinese pocket. Honiara protests clearly appears to be a revenge of all these years where a lot of Chinese are now homeless as they were specifically targeted by the raged locals who call this violent protest as a fight against Chinese invasion on the islands.

Solomon Islands PM Sogavare has survived no-confidence vote after riots but indications of fresh elections cannot be ruled out.