Dragon feeding both KNLA and Myanmar army against each other? 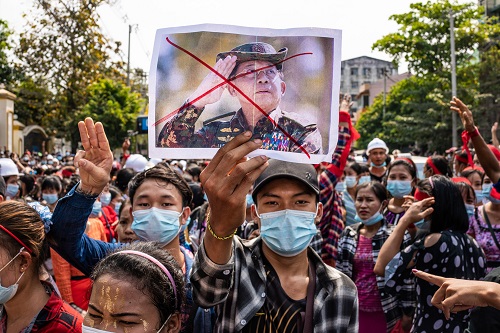 The People’s Liberation Army (PLA) has been providing arms and funds to the Karen National Liberation Army (KNLA) and other local militant groups to fight Myanmar’s Tatmadaw (i.e. the Armed Forces of Myanmar) while at the same time has been dealing with the Tatmadaw to weaken both. Recent years have seen a series of events which shows a picture of a wrestling match between local militants and local army with dragon backing both.

Myanmar Army (MA) and the KNLA clashed in Mae Htaw Tha Lay Village near Lay Kay Kaw new city in Karen state’s Myawaddy district on the morning of 16 December 2021, due to the arrest of activists by Myanmar’s Junta Government in Lay Kay Kaw. Photos of destruction at Myo Thit in Lay Kay Kaw following a heavy skirmish between MA troops and a joint force of KNLA and PDF.

KNLA has ‘killed more MA soldiers’ since June 2021, with 26 fatalities, as well as 35 injuries, being inflicted over the past week alone during fighting in Hpapun, Karen State, the group’s information department said in a statement. Between July 15 and 22 there were 29 clashes between the Tatmadaw forces and Brigade 5 of the KNLA, the statement further said.

In all, 157 square kilometers of Myanmarese territory has fallen under the control of Chinese enterprises tied to gambling, money laundering, cryptocurrency, and other criminal networks. The Karen National Union (KNU) and its armed wing, the KNLA have been at war with the Myanmar government since 1949. Over the years, several factions broke away from the largely Christian KNLA to form their own armed groups, most notably the Democratic Karen Buddhist Army (DKBA) in 1994. In 2009, the Tatmadaw announced their plan to incorporate ethnic armed organizations into a “border guard force. This force would be permitted to develop their own territory as proxies of the military. Factions of the DKBA joined this scheme, under the leadership of Karen border guard leader General Saw Chit Thu—a figure behind two of the new city projects. It must be noted that previously Chit Thu’s force participated in organized attacks against local ethnic armed organizations in both Mon States and Karen. Reference

Meanwhile, the KNU signed a Nationwide Ceasefire Agreement (NCA) with the Myanmar government in 2015. With the peace process now stalled, KNU leaders are considering different avenues to autonomy, and their commitment to the NCA has become precarious. Tensions between the KNU and the Tatmadaw and its border guard force have erupted in fighting between the two sides as recently as February 2021.

In short, during these three deals, the Chinese investors involved armed groups on both sides of the conflict in potentially lucrative development projects of $36 billion. The total value of the latest project is projected to bring 10-fold return on land transactions alone. By 2027, the Yatai Company’s promotional materials show a total valuation of the Yatai citi’s Shwekoko project touching $202.2 billion. Combined, the three projects promise to bring in hundreds of thousands of people—presumably Chinese—into one of the world’s most fragile conflict hotspots

The Chinese enterprises behind these three projects have several things in common: Their leadership has links to criminal networks or actors involved in illicit activities; they have pre-existing organizations engaged in casinos and crypto currencies; they claim to be associated with Beijing’s Belt and Road Initiative (BRI) and flaunt connections with key Chinese government agencies; and their activities in Cambodia actually led to a crackdown by the Cambodian and Chinese governments.

Each of the projects has different sets of investors, working with various configurations of Karen armed groups. The Yatai New City Project (Shwekoko) is the outcome of an agreement which was signed in July 2017 by the Hong Kong-registered Yatai International Holdings Group (IHG) and Karen border guard force (BGF). In this deal, Yatai IHG positioned the BGF, and the national armed forces behind it, to generate a huge income via Chinese investors who were forced to leave Sihanoukville by the crackdown on illegal casino activities. The company had significant business interests in Philippines, Cambodia and Palau, with a focus on entertainment and blockchain. Shwekoko is the only area that is authorized to operate casinos with a revenue expected to reach $11.4 billion in ten years time from start. The city will further be built to accommodate a population of 450,000.

5. WHY BANGLADESH SHOULD BE CONCERNED?

These three projects present a range of concerns for Karen state, Myanmar as a whole, and more broadly, Myanmar’s relations with the rest of the world. Bangladesh, should be especially concerned, given its short but porous border with Myanmar.

It is known that illegal gambling fueled a massive property bubble in Sihanoukville pushing the local population out of the city. The city’s gradual leaning towards Chinese culture and practices further drove out locals, as it became difficult to engage in business without Chinese-language ability. Casinos employed members of the Chinese mafia who sometimes violently attacked the local police and civilians like they do in Pakistan now a days.

China initially increased lawlessness which finally forced the Cambodian government to turn to Beijing for assistance in a crackdown. As a result of rampant money laundering, Cambodia also lost its access to international finance. Given the size and scope of the Chinese investors’ plans for these cities and the fragility of Karen State, the negative effects could be even more potent than they were in Sihanoukville.

It is also important to note that none of these projects had proper approval of the Myanmar Investment Commission or the National Economic Coordination Commission and they have also not been reviewed by the national legislature, i.e. the Union Parliament. This clearly hints that China is forcefully occupying Myanmar and turning it into its colony.

In their public narratives, the three companies claim to be operating under the umbrella of China’s BRI and thereby are actually a risk to the reputation of the Chinese government in Myanmar and beyond. Besides casting an aura of criminality over the BRI, these actors are likely to generate considerable costs for Chinese law enforcement, as well..

Some Chinese officials may also be spreading a complex Chinese criminal network throughout the country on the pretext of securing a permanent foothold on Myanmar’s Indian Ocean coast. With increasing planned criminal activities and chinese influence on Myanmar authorities, we may soon see Naypyitaw inviting China’s police and state-owned enterprises to control the situation, as was the case in Cambodia earlier. Such a scheme could explain why Chinese authorities have supported the Yatai Company’s efforts to build influence with the Karen State government via large donations of pandemic-related medical supplies.

7. COVID-19 AND DIMMING PROSPECTS FOR PEACE

Myanmar, like the rest of the world, is absorbed in responding to the global coronavirus crisis. The Chinese investors in these projects, by contrast, are plowing ahead with the construction of housing estates and casinos. Without U.S. and allied support to help Myanmar resist this form of investment, the government will lack the capacity to fend it off. Instead, armed actors will gain influence, Karen’s hopes for autonomy will fall victim to foreign ownership, and new forms of violent conflict could engulf this fragile country.